My wallpapers have been on display this month at Bloomsbury Design, 61b Judd Street, London WC1 9QT, UK finishing on May 31st.

Magnificence and Convenience:  A History of Design and Decoration at Castle Howard

The Wallpaper History Society warmly invites you to our Annual General Meeting and Christmas Lecture on Friday 13th December 2019. This year we are delighted to announce our speaker, Eleanor Brooke-Peat,Curator at Castle Howard who will present a talk on her successful exhibition Magnificence and Convenience: A History of Design and Decoration at Castle Howard.Castle Howard has been home to the Howard family for over 300 years. From the splendour of the 3rd Earl of Carlisle’s state apartments to the fashionable Arts and Crafts wallpapers introduced by the 9th Countess, every generation has made their mark. Castle Howard still has fragments and examples of a succession of decorative schemes used over the years which reflect the differing tastes of the owner family. This illustrated talk will examine the changing fashions and fortunes of Castle Howard through its decoration, with a particular focus on the use of the wallpaper by successive generations, and a look to what the future holds for this magnificent building.

Please join us after the talk for our usual festive wine and light buffet refreshment and an opportunity to discuss all things wallpaper at the wonderful historic Art Workers’ Guild.  Everyone is welcome!

Brixton Print Shed’s Bike Chain paper is featured in a recent wallpaper book written by Zoë Hendon, Head of Collections at the Museum of Domestic Design and Architecture, London, UK. This usefully compact survey focuses on the development of wallpaper in the UK up to and including contemporary manufacture.It is published by Bloomsbury in their Shire imprint, a series exploring aspects of Britain’s visual heritage. 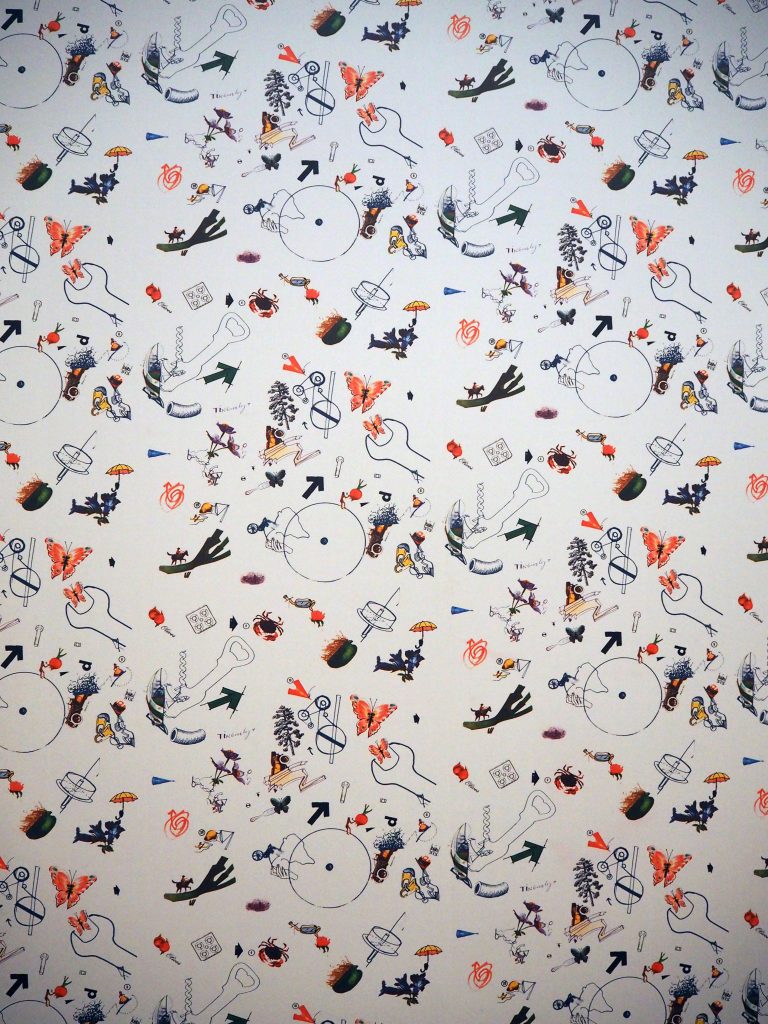 Last year the Whitworth Gallery’s wallpaper curator Amy George organized an interesting exhibition of post-war British wallpaper which ran from 29 January to 9 October 2016. This displayed some highlights from the permament collection, focusing on the Palladio range of papers produced for architects from 1955 to 1971.

And to emphasise that these innovative wallpapers really are having a well-deserved moment, MoDA presented a symposium  and follow-on display about the Palladio papers in mid-September. Then in December Zoë Hendon  – Head of Collections at the Museum of Domestic Design & Architecture – and Christine Woods – ex-curator, wallpaper, the Whitworth Gallery – both gave  excellent and complementary presentations about the Palladio papers at the Wallpaper History Society’s AGM; Christine Woods’ talk providing industry information concerning sales, sites and production whilst Zoë Hendon looked at the informal commissioning network of artists and designers centred at the RCA.

Richard and Guy Busby, progressive directors of the Lightbown Aspinall branch of the Wallpaper Manufacturers Ltd (WPM) launched their collections of 100 architects’ papers in 1952. Then following on from the Festival of Britain the Busbys began commissioning another architects’ range – Palladio – to decorate the new public and commercial buildings being built as part of post-war redevelopment; architects wanted larger scale patterns for these big interior spaces, very different from the domestic wallpaper market.

Helped by Roger Nicholson, who with his brother Robert had designed for the Festival of Britain, over 50 artists and designers – including both Nicholsons – were commissioned to produce designs for the first six books of Palladio collections. When Roger Nicholson became head of textiles at the Royal College of Art in 1958, several of his students gained Palladio commissions, notably Audrey Levy, whose designs Maze, Treescape, Universe and Pebble were on display in this exhibition.  Garden and Aerial, two patterns by Roger Nicholson were also displayed, illustrating the eclectic range of contemporary styles; Garden, a rustic Edwardian quasi-typeface design, printed in 1950 (probably for John line’s Limited Edition, launched next year at the Festival of Britain) whilst Aerial appeared in the Palladio 5 collection in 1961, a larger scale abstracted aerial perspective evoking Peter Lanyon’s glider paintings of the same period.

The Busby’s decision to commission designs from artists and independent designers via Roger Nicholson’s contacts meant the Palladio range reflected contemporary art and design currents both home and abroad, and it’s worth recalling how this and other factors helped make these collections such a critical success, still recognised today.

The Council of Industrial Design’s recent initiative The Festival Pattern Group, and the exhibition Painting into Textiles at the ICA, London in 1953 (organised by the trade magazine The Ambassador, which promoted fine art as an inspiration to design), reflected fertile exchanges taking place across design disciplines, science and industry, the fine and applied arts, recalling the pre-war generation (Bawden, Marx, Ravillious and others) which had also worked happily across such divides.

In this respect the WPM was playing catch-up with the UK’s textile industry, where artists and designers had already been working with companies like Heal’s, Liberty’s and Whitehead, whilst the more enterprising like Eduardo Paolozzi and Shirley Craven were engaged in lower volume textile production themselves. In addition, the influx of emigré textile designers and manufacturers such as Jacqueline Groag, Tibor Reich, and the Aschers had brought further exposure to Modern Movement ideas, better established on the continent.

The introduction of screen printing after the war had a huge impact on surface design, allowing bigger and larger repeats for both textiles and wallpaper; and with cheaper set-up costs it also allowed for shorter runs, encouraging more speculative and avant-garde designs. Two exhibited papers Rockall by Edward Veevers and Audrey Levy’s Universe (both produced for Palladio 5) demonstrate how effectively designers exploited screen printing’s capacity to reproduce textures and graphic mark-making. Most wall-hung papers in the exhibition were displayed in vertical drops of 3 metres which showed the bigger patterns off well, for example Sunflower, designed by Pat Albeck for the larger scale Palladio collection Magnus 2 in 1961. Its repeat is over a metre long, and a smaller scale version is still produced by Sanderson.

Block and machine printed papers in the ‘Contemporary’ style produced during and after the Festival of Britain were also displayed, including Lucien Day’s Diabolo and Provence, probably the best known and most reproduced pattern of the era.

Several designs won awards, but the Palladio papers were not a commercial success. When WPM was taken over by Reed International in 1966 the collection was transferred from Lightbown Aspinall to Sanderson. Although 5 further Palladio ranges were produced, these were designed by anonymous (and less well-paid) in-house designers and aimed more profitably towards the domestic market.

My knowledge and appreciation of this exhibition was greatly enhanced (retrospectively) by Christine Woods’ (ex-curator, wallpaper, the Whitworth Gallery) and Zöe Hendon’s (Head of Collections at the Museum of Domestic Design & Architecture). excellent and complementary presentations on the Palladio papers at the Wallpaper History Society’s recent AGM event. 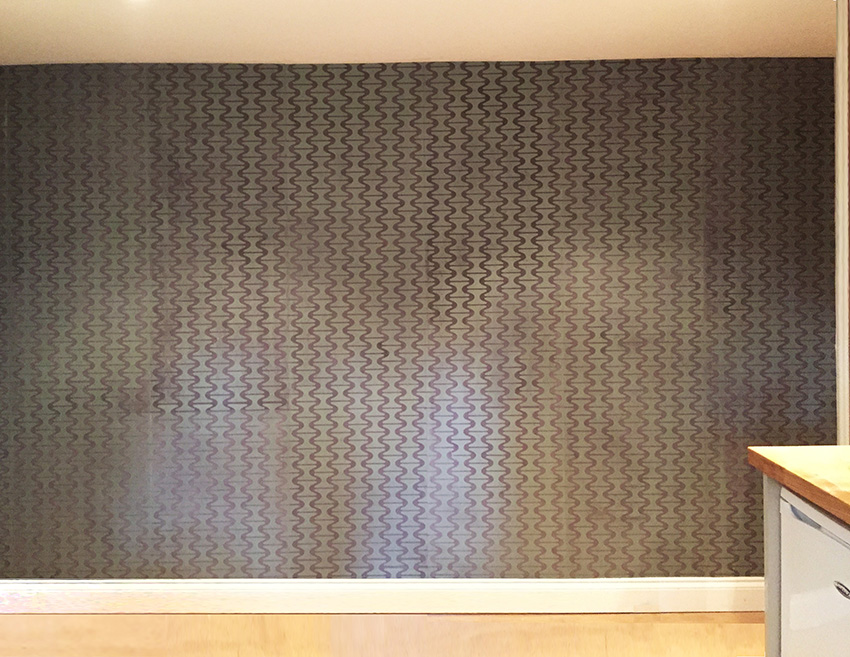 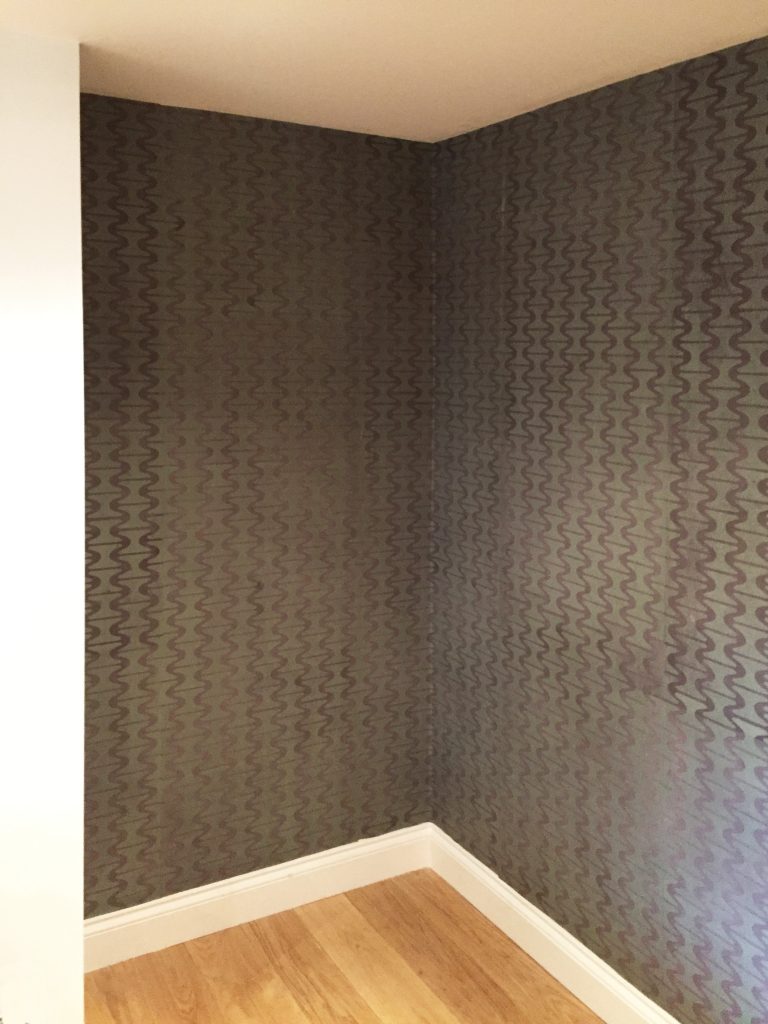 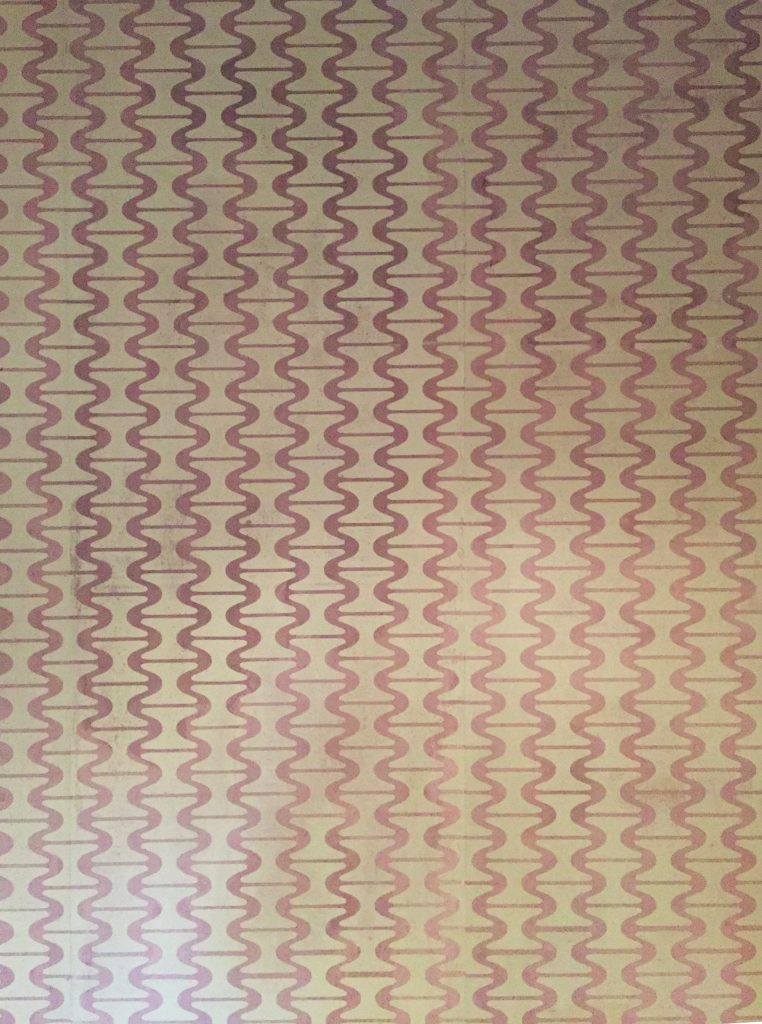 A prestigious commission for the Duerdoth Marshall residence in Bowater Place, Blackheath, South London  – now in situ! See other colourways of this design here: 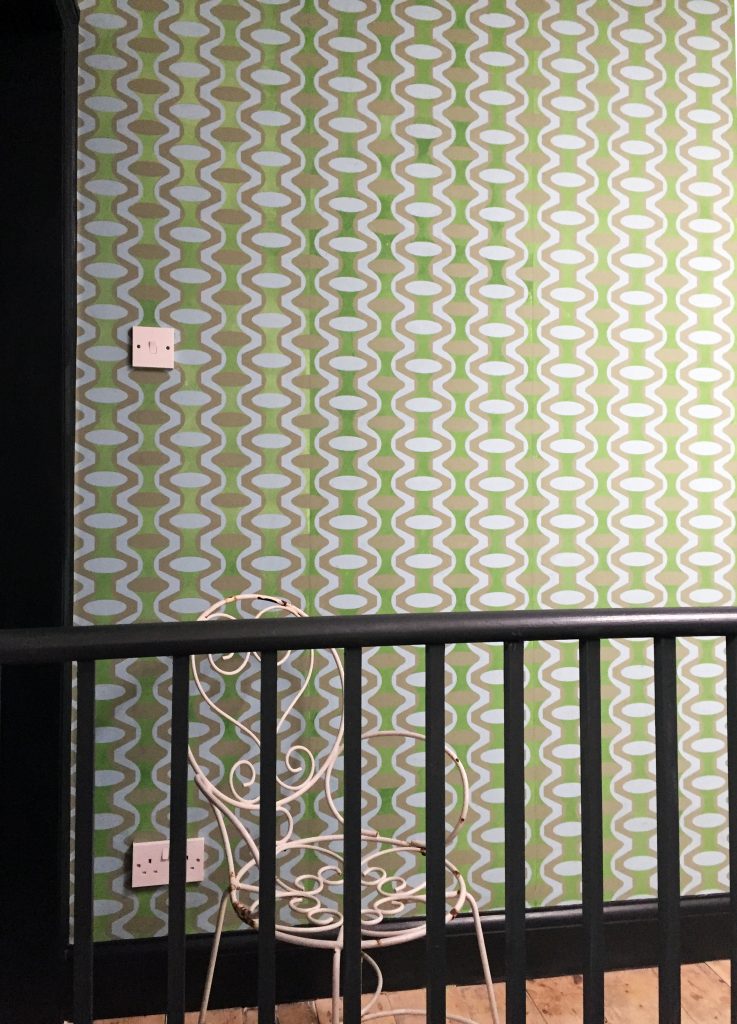 This review of a recent wallpaper exhibition was written for the Wallpaper History Society.

The punning title of this exhibition puzzled me; faire le mur means to sneak out or go over the wall. But if its subtitle – 4 centuries of wallpaper – promised an (exagurated – actually 350) international narrative of papiers peints, this proved misleading. The 300 wallpapers selected for display from the museum’s 400,000 reserve collection were virtually all French, ranging from mid 18th century domino papers to contemporary digital prints. A scant dozen or so exhibits came from British and German manufacturers.

But despite this chauvinistic and emphatically haut bourgeois perspective, cluttered and confusing exhibition layout, no introduction, barely legible guides, and poorly designed and printed catalogue, there was lots to like: Pompeian panels and arabesques by Reveillion and Jaquemart & Bénard alongside Timourous Beasties’ Grand Blotch Damask, Scenics from Desfossé (Eden and Brazil), sumptuous trompe l’oeil swaggings and draperies by Jaquemart and Dufour. Irisé papers included an early one designed by Fritz Zuber (1829 – Zuber didn’t copyright their process until 1843), as well as two relatively recent ones designed by Jean-Michel Folon for Zuber and printed in the mid-70s.

There were only two commemorative papers: Barricades at the Faubourg Saint-Antoine, a scene from the 1830 revolution block-printed by Deguette and Magnier 5 years later, and Watching The War, one of Francesco Simeti’s digital papers about the Afghan War printed in 2002. Other artists’ papers were displayed throughout the exhibition, most as well known, including Studio Job’s Skeleton, Claud Closky’s Tatoos, Allen Jones’ Righthand Lady, Niki de Saint Phalle’s Nana and Peter Phillip’s Kenya, these last three printed by Marburg in 1972. An interesting design by the late Zaha Hadid upheld the tradition of architect-designed papers (Vosey, Lloyd Wright et al) though this appeared in a black and white themed display, not with the architectural papers.

Overall an enjoyable but frustrating exhibition; hopefully the Musée des Arts Decoratifs’ wonderful collection will get another outing soon, perhaps this side of the chanel?

In 1812 the Georgian poet, essayist and radical journalist Leigh Hunt spent two years in Horsemonger Lane Gaol, near London’s Elephant and Castle; he had libelled the Prince Regent. Funded by Shelley, he was able to decorate his cell at with a sky-blue ceiling and rose-trellised wallpaper.

In 2009 I devised and delivered a wallpaper printing workshop programme at HMP Bronzefield, together with artist Hugh Dunford Wood. A mixed-category local women’s prison near Heathrow Airport, London, it is run by the global services company Sodexo which manages prisons in many countries across the world including four in the UK.

Sodexo rent the building from the Home Office, whose lease states that the prison must be returned in the same condition. Despite this preventing wallpaper being hung anywhere in the prison, much of the prisoners’ beautiful papers are displayed on a large panel hung on Main Street, the prison atrium. You can see some of these here.